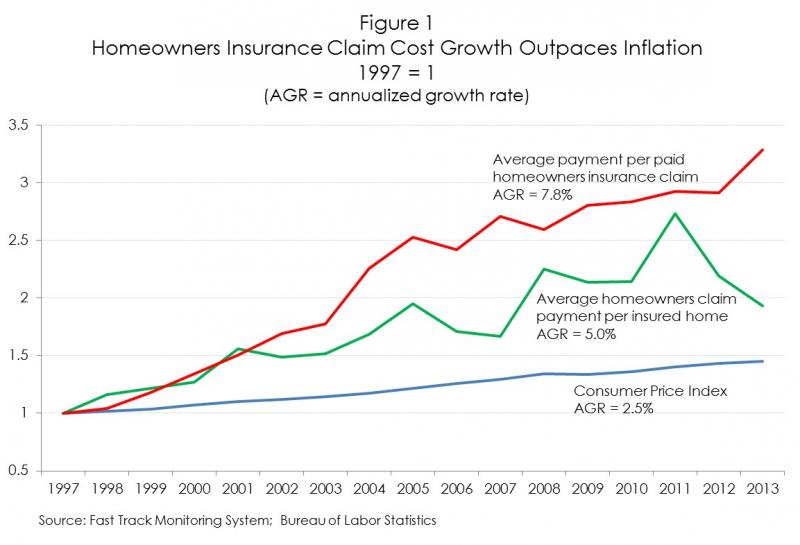 The growth in underlying claim costs depicted in Figure 1 is undoubtedly the chief explanation for why homeowners insurance coverage costs have come to exceed personal auto insurance costs for many households. Preliminary research by IRC has documented much smaller growth in auto liability claim costs.[7] The relevant question is why homeowners claim severity increased so rapidly. Several contributing factors may form the answer to this question:

Volatility refers to the degree to which claim frequency rates change from one year to the next and the extent to which the frequency trend maintains a consistent direction (that is, increasing, decreasing, or remaining level). Homeowners insurance claim frequency trends are highly volatility. This is especially true for claims arising from catastrophes.

It would be reasonable to expect to find different homeowners insurance claim outcomes and trends in different states. After all, home values and construction costs vary widely, as do the risks of particular perils like wildfire, hurricane, and tornadoes.  Figure 2 illustrates just how much individual state trends and outcomes can differ.  The figure depicts the average annual claim payment per insured home (loss costs) in each state for the five-year period, 2009-2013. Six states (Alabama, Colorado, Kansas, Mississippi, Oklahoma, and Tennessee) experienced five-year average annual paid loss costs greater than $700. Four additional states (Arkansas, George, Missouri, and Texas) experienced five-year annual averages between $601 and $700. At the other end of the spectrum, 15 states experienced average annual paid loss costs of $400 or less. As is readily apparent, the higher cost states were concentrated in the South-Central U.S., and lower cost states tended to be on or near either the East or West Coast. 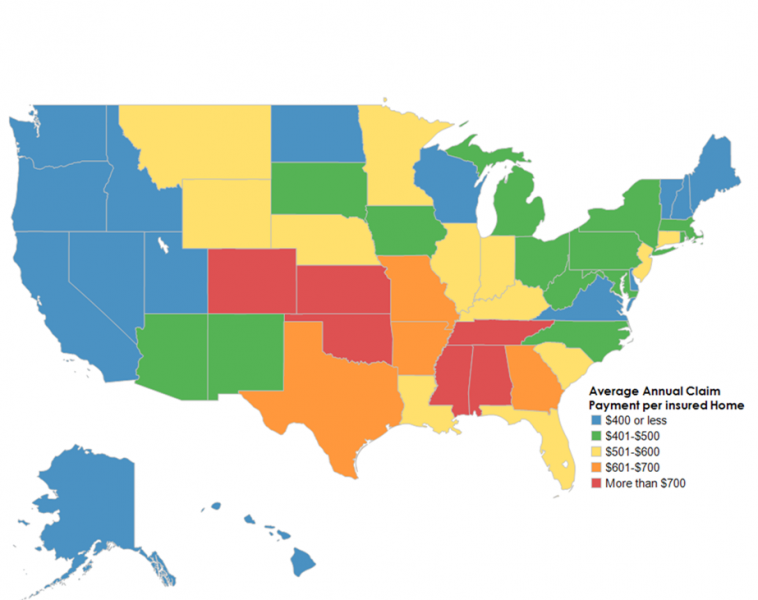 It is important to note that average homeowners claim costs, both loss costs and average paid severity, can change dramatically from one year to the next. A state experiencing a year of low average costs could experience higher than average costs the next year due to a more active storm season. Averaging costs over a five-year period allows for a more realistic comparison of costs in different states. Even then, however, costs differences across states can be dramatically affected by a single year’s experience. In Florida, for example, paid loss costs average $512 for the period 2009-2013. If 2004’s experience in Florida had been repeated during that time period, Florida’s average loss costs, even without adjusting for inflation, would have exceeded $800.

The average state costs depicted in Figure 2 should not be viewed as a representation of prospective risk. Using Florida again as an example, the prospective risk faced by homeowners and insurance companies is very high, compared to most other states, due to its exposure to potentially catastrophic hurricanes and the high value of property located in exposed coastal areas.  Figure 2, therefore, may be useful in understanding recent claim experience, but it is not intended to be interpreted or used as a measure of future expected costs or trends.

From the IRC’s analysis of basic homeowners claim trends, three key facts emerge to challenge the insurance community in the years ahead:

Rapidly rising claim costs. On a countrywide basis, homeowners insurance claim costs have been rising at a rate that is 2 or 3 times greater than the rate of inflation, depending on the measure used. In some individual states, claim costs have been rising even more rapidly. The continuation of this trend is, at best, problematic, given the likelihood that rising coverage costs will attract increased attention and reaction from regulators and the public. Managing growth in claim costs will be a significant challenge for the homeowners insurance community in the years ahead, should the trends documented by IRC continue.

Extreme volatility. That homeowners insurance claims experience is more volatile, especially at the state level, than claims experience in most other property-casualty products is not news. Extended periods of relative calm in some states, such as Florida, will tempt many to disregard or discount the importance of accurately acknowledging and fully confronting the potential risk of future catastrophe events. Emphasizing future risk potential and distinguishing between recent past experience and future risk will be another major challenge for the industry.

Emerging “hot zones”. The IRC analysis of homeowners claim trends in individual states revealed several states (including, in particular, Colorado, Oklahoma, and Kansas) where claim costs appear to have shifted to new and significantly higher levels, and have stayed at the new levels. In Colorado, for example, paid loss costs averaged $804 for the 5-year period 2009-2013, which was 179 percent more than the average payment per insured home ($288) during the previous 12 years. A full understanding of the factors and conditions causing this apparent shift is needed.

The property-casualty insurance industry has responded to the challenges posed by today’s homeowners insurance environment in several ways. Homeowners insurance products have been redesigned to better serve insurance markets. For example, the widespread availability of special endorsements allows insurers to modify or expand coverage provided in a single policy, and higher deductible options provide a tool by which consumers can manage their insurance costs while preserving critical protection. Insurers also have incorporated sophisticated models into their business processes to more effectively evaluate and manage catastrophe risk, and have adopted more refined rating plans that more closely match individual policy risks and premiums. Another response by some insurers has been to offer mitigation discounts to policyholders who take specific steps to reduce the risk of loss, such as installing roof straps and hurricane shutters in wind-prone areas.

Another response to the changing claim environment has been increased efforts to combat claim fraud. Catastrophic weather events that displace hundreds of families and produce numerous simultaneous insurance claims often result in fraudulent activity and behavior. The National Insurance Crime Bureau,[11] the Coalition Against Insurance Fraud,[12] and several state-based organizations have increased efforts and strengthened programs to educate consumers about insurance fraud and to identify and prosecute its perpetrators. In addition, many individual carriers support internal investigative efforts and work closely with local law enforcement officials to fight claim fraud.

The industry has also invested in advancing the science and engineering of loss prevention and mitigation. In addition to the efforts of individual insurers, the industry has coordinated loss prevention and mitigation research efforts through the work of the Institute for Business and Home Safety (IBHS). IBHS conducts research on home and building construction design standards and methods aimed at strengthening homes, businesses, and communities against the destructive effects of natural disasters and other causes of loss. IBHS promotes the use of building materials, design standards, and construction techniques aimed at minimizing loss to life and property from natural disasters and other perils. IBHS is also an active advocate for strong state and local building codes.[13]

[6] The IRC findings reported here and elsewhere in this paper are for all policy forms combined.

[11] More information about the National Insurance Crime Bureau can be found at www.nicb.org.

[12] More information about the Coalition Against Insurance Fraud can be found at www.insurancefraud.org.

[13] More information about the Insurance Institute for Business and Home Safety can be found at www.disastersafety.org.

Motorists who forgo purchasing auto insurance create problems for regulators, insurers, and insured drivers. In addition to paying for insurance that covers their own actions, insured drivers pay a portion of the costs generated by drivers who are uninsured. They do so by purchasing uninsured motorists (UM) coverage.

The Insurance Research Council (IRC) analyzes auto injury claim frequency data to estimate the percentage of drivers who are uninsured. The IRC’s most recent UM study, based on 2012 claim frequency data, shows that even though the percentage of UMs trended down over the past few years, about one in eight drivers remain uninsured. This translates to about 30 million drivers countrywide. 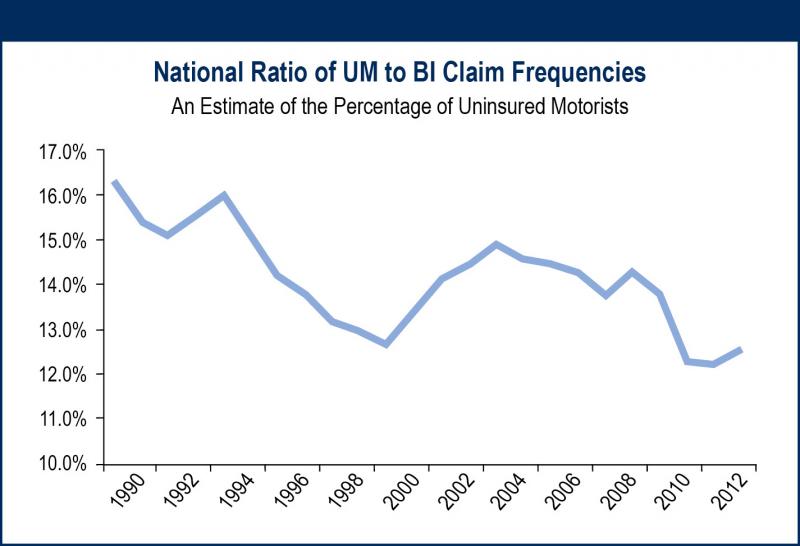 Many states have enacted laws and penalties targeting UMs. The Nevada legislature is currently considering a bill that would limit lawsuit payouts to uninsured drivers involved in auto accidents. These no pay, no play laws, which are in the books in varied forms in 10 states, prevent a UM from collecting compensation for noneconomic damages arising from a traffic accident with an insured, at-fault driver. Noneconomic damages include compensation for pain and suffering, emotional distress, inconvenience, and so forth. It should be noted that these laws still allow the uninsured driver to collect economic damages (which may include repair costs, medical bills, lost wages, future economic loss, etc.).

Critics claim these laws disproportionally affect the least fortunate. Proponents of the law say it would help insurance consumers in two ways. First, the law may reduce insurance costs by lowering the amount paid in noneconomic damages to the uninsured. Second, these laws may incentivize uninsured drivers to become insured.

A recent IRC study, The Potential Effects of No Pay, No Play Laws, provides insight into the potential effects of enacting the proposed legislation in Nevada. The study estimates that Nevada paid $16.5 million in noneconomic damages to UMs in 2014. Under a fully effective no pay, no play law, these costs would be eliminated, which could result in premium savings for Nevada’s insured motorists.

A decline of this magnitude could potentially decrease Nevada’s UM rate (which currently stands at 12.2%), the number of uninsured (estimated to be 232,182) and the state’s UM claim payments (which total $46.5 million).